Sri Lanka has a rich heritage of traditional dance that is said to date back to the 4th century BC. The three main styles of classical dance are Kandyan dance, low country dance and Sabaragamuwa dance. Besides these classical styles, the country also have a variety of folk dances based on traditional beliefs and festivities. The costumes worn by the performers are often spectacular, such as the elaborate ornaments worn by Kandyan dancers and the striking masks used in devil dance. All forms of dancing in Sri Lanka combine graceful and vigorous movements, performed to the rhythm of drum beats. However, the gestures used in the dances differs, as do the costumes and the shape and size of the drums. 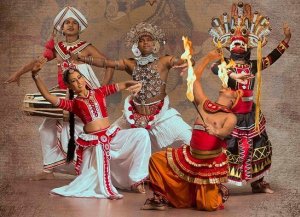 The national dance of Sri Lanka is Kandyan dance. There are five types of Kandyan dance Ves, Vannam, Udekki, Pantheru and Naiyandi. All of these are associated with Kohomba Kankariya, a ritual to appease Kandyan deities. Traditionally, the dance was performed solely by men, but since the 1950s women have also been trained in it. The typical costume of a male dancer comprises a white loincloth, a beaded breastplate, silver bangles on the arms and ankles, a headdress and large ear ornaments.

The most popular and sacred of the dance forms, Ves is said to have originated from an ancient purification ritual.
The dance was originally performed only by men within the temple precincts. Today, however, it can be seen at various religious ceremonies and processions. There are several rituals associated with the preparations for the dance, a special ceremony is held during which the sacred headdress is placed on the performer’s head. The Ves headdress is of great significance as it is said to be a replica of the one worn by Kohomba, a Kandyan deity.

A combination of poetry and dance, Vannam is inspired by nature, legend and Buddhist stories. There are 18 classical forms of Vannam, and another three new forms were developed in the 20th century. The dance often portray the movement of elephants (Gajaga Vannam). Peacocks (Mayura Vannam), snakes (Uraga Vannam) and other creatures. Female dancers usually take center stage for these dances, and there is greater freedom to either perform in the traditional manner or to add modern touches.

This dance is named after udekki, a small hourglass shaped drum that accompanies the performance. Legend states that the construction of the drum was ordered by lord Sakra, the king of all gods. The Hindu god Shiva is often depicted holding this drum. The costume for Udekki resembles that for Pantheru, except that dancers wear elaborate beaded jackets and have frills around their waist.

This dance is said to have been performed originally to celebrate victory in war. The pantheru is an instrument that resembles a tambourine (without the skin), and has small cymbals attached around its rim. Pantheru dances twirl the instrument and pass it from hand to hand during the performance. The costume for this dance is simpler than many of the other dance forms, featuring a white turban and a white handkerchief tied at the waist.

The Naiyandi dance is traditionally performed during the lighting of the lamps for Kohomba Kankariya celebration (see p 134) in Kandy on ceremonial occasions. Naiyandi dancers wear a white loincloth and turban, a beaded breast plate, a waistband as well as anklets. 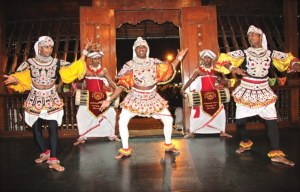 Also known as Ruhunu dance, this form of dance can be seen in the coastal belt of Sri Lanka. The dances are often very ritualistic and are sometimes performed to propitiate demons causing sickness.

A ritualistic healing ceomony, devil dance was traditionally performed to free a person from bad luck or illness. One of the many types of devil dance, Sanni Yakku is performed to rid a victim of the disease demon. During the night-long exorcism ritual, the demon making the person ill is summoned, offerings are made, and then the spirit is forced to leave. There are 18 Sanni demons, each for a different diseases and representing a distinct dance, mask and drum beat.

Perhaps the most popular of all low country dance forms, Kolam comprises a series of dances loosely based on a Buddhist Jataka tale. A combination of dance and drama, a typical performance starts with a description of Kolam’s origins by the narrator or master of ceremonies. According to legend, the mythical queen Menikpala craved to see a mask dance during her pregnancy. Vishwakarma, the god of artists and craftsmen, is believed to have full filled her carving by giving her husband, King Mahasammatha, the lyrics and the Kolam masks for the dance. A variety of masks are used in the performance, some caricatures and some grotesque.

This style of dance can be called a mid-country dance, as it is particularly popular in the Ratnapura area. Although Sabaragamuwa is a fusion of low country and Kandyan dance forms, it has its own unique styles. Its traditions include the ancient tribal dances performed by the Veddahs. 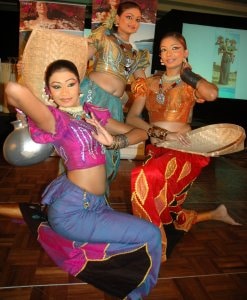 In contrast to the classical forms, folk dances are lighter and less ritualistic. Among the best known folk dances of Sri Lanka are Leekeli (stick dance), performed by men and women who hold two sticks aloft and strike them together to complement the drum beats; Kulu (harvest dance), in which women depict the reaping and separating of chaff; and kalagedi (water ceremony dance), during which female dancers portray the fetching of water from rivers while dancing with clay pots.