Religion plays a very important role in the day-to-day life of Sri Lankan’s. Although the island is predominantly Buddhist, other religions such as Hinduism, Islam and Christianity also have a marked presence here. The country is an important pilgrimage destination for Buddhists from around the world, as it is said that the Buddha visited the island three times between 528 and 520 BC. Animism, albeit with a Buddhist or Hindu influence, is still practiced among the Veddahs, the original inhabitants of the island. Sri Lanka has many sacred sites of significance to the island’s various religious groups, including Kataragama, which is a holy site for Buddhists, Hindus and Muslims. 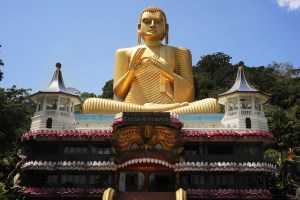 heravada Buddhism is the most widely practiced from of the religion on the island. The sect is older than the Mahayana School of Buddhism and preserves the orthodox teachings of the Buddha. It is based on the Pail Canon, which is believed to be the oldest record of the Buddha’s teachings. All Buddhist temples in Sri Lanka comprise an image house, where the images and statues of the Buddha as well as of other gods are kept, a dagoba (a dome-shaped memorial) and a bo tree. Symbolic of alignment, lotus flowers are often used in the decoration of these temples.

The offering of coconut oil lamps is an important Buddhist ritual. It is followed by a wish or prayer to the Buddha, who is regarded as the “light of the three worlds” and the dispeller of darkness and ignorance. Besides oil lamps, worshippers also offer incense, flowers and food.

Mihintale is where the Buddhist monk Mahinda, son of the Indian King Asoka, is said to have converted King Devanampiya Tissa of Anuradhapura to Buddhism. This event marked the introduction of the religion to Sri Lanka. Buddhist monks can be easily recognized by their yellow or orange robes. Admitted to the Buddhist Order as novices, they go through intensive religious training before becoming a member of the Sangha (a monastic community of ordained Buddhist monks or nuns).

Stalls selling religious offerings are often found near the temples. The wide variety of offerings at these kiosks ranges from lotus flowers and images of the Buddha to food and drink and even plastic toys. 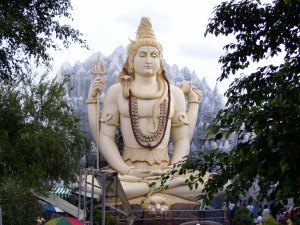 Hindu communities are concentrated in the northern and eastern provinces of the country. The Hindu belief system is based on the tenets of samsara (successive cycles of birth, death and rebirth), Karma (the law of cause and effect) and dharma (righteousness). The three most important figures of the Hindu pantheon are Brahma, the creator of the world; Vishnu, who protects the world and preserves order; and Shiva, the god of destruction and regeneration.

Gopurams, or ceremonial gateways, mark the entrance to Hindu temples in Sri Lanka. These structures are often covered with brightly painted sculptures of Hindu deities. The inner sanctum of the temples is only opened during puja ceremonies so that worshipers can make their offerings.

Temple pujas are religious ceremonies performed as a tribute to the deities. They are usually atmospheric incense burning, drums beating and recitations from the Vedas (the oldest scriptures of Hinduism).

Fruits and flowers offered to a deity during puja ceremonies are termed as prasada. It is believed that the deity partakes of the offering and then returns it. The consecrated offering is then distributed and eaten by the devotees. 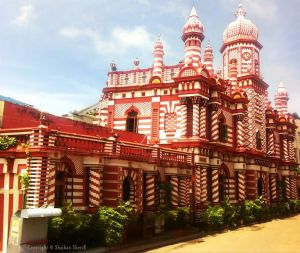 Islam was brought to Sri Lanka by Arab traders in the 7th century. Most concentrated along the coast, the Muslim community comprises less than 10 percent of the population. All Muslims adhere to the Five Pillars of Islam: shahadah (professing faith), salat (praying five times a day), zakat (giving to charity), sawm (fasting during Ramadan) and undertaking the Hajj pilgrimage to Mecca.

The rounded white cap worn by Muslim men and boys is known as a taqiyah or topi.

The thobe, a loose ankle-length white robe, is the uniform for boys attending madrasas (Koranic schools). 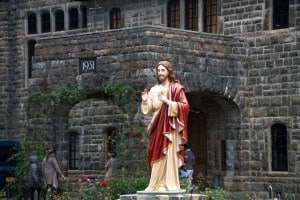 Christians are known to have settled on the Sri Lankan coast in the early centuries AD. However, the religion, specifically Roman Catholicism, gained prominence only with the arrival of the Portuguese in the 16th century. Protestantism and other Christian denominators were introduced during the Dutch and the British eras. Since the end of Colonial rule, the number of Sri Lankan Christians has declined to about 7 per cent of the population.

The Catholic St. Mary’s Church in Negombo is one of the many reminders Portuguese missionary activity in Sri Lanka.